Redemption are a 5 piece band of ex pro musos from East Anglia. After several years touring alongside some of the biggest names in the music scene, we have decided to return to our roots hitting all the stages and festivals back in our homelands of East Anglia such as Kings Lynn’s Festival Too, Euston Hall Country Show, Horsey Festival, The Brickmakers, Holbeach Music & Beer festival, Fat Cat Brewery tap, The Hansa Festival, VW Festival, Sheringham 40s festival…

The band includes, Nigel Portass on Hammond and boogie woogie piano. In the 60s he was one of Britain’s finest session musicians having made his name touring all over the world and playing on hits with artists such as Van Morrison, Chuck Berry, Tom Jones, Rod Stewart… If that wasn't enough, on saxophone the amazing John Wilmott, who is also from pretty fine stock having played and toured with bands such as Robert Plant of Led Zeppelin and the James Taylor Quartet.. Singer & bass player Joseph Hartley, from Norwich, has made a name for himself on the East Anglian music scene playing with with local Norfolk guys "Whole lotta hair", "Cobbler Bob" and "Addisons Uncle”. The band is complimented with the amazing guitar and vocals of Lee Batiuk, a music producer from Lincolnshire and Sean Portass on drums.

Redemption play everything to get you on the dance floor from Boogie Woogie, Rock, Funk, Soul and Rock n Roll, performing hits by artists such as Wild Cherry, B.B. King, Booker T and the MGs, James Brown, Little Richard, Jerry Lee lewis, The Doobie Brothers, Chuck Berry, Stevie Wonder & The Average White Band. Always go down a storm wherever they play.

Most of the band have been there and done it so are now only in it for the fun and gigging so now priced to play in all venues from pubs & clubs to weddings & festivals. to book the band tel Dana on 07881 642898
< Return to previous page 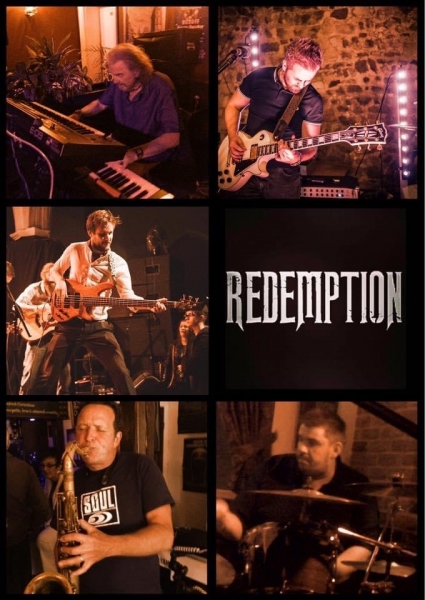